This story is about street and race bike tires, my thoughts and from my admittedly rather dated experience. Today several manufacturers — Bridgestone, Michelin, Avon, Dunlop, Metezler, etc. — offer a wide variety of tires for motorcycles. Metzeler, Dunlop and Bridgestone, for example, have 20 or more different models of tires in their “Sports,” “Touring,” and “American” categories. Some are bias ply and some are radials, some need tubes and some are designed to run tubeless.

Does it matter? Some folks feel that any street tire from a major company is good enough. Depending on your riding style this can be false. If you ride like an old fogy it may not matter. I have a pal who was rather proud that he was saving tons of money by putting car tires on his Honda PC800. Car tires are, in general, cheaper and last longer that motorcycle tires, but I cringed at the thought of him going around a corner. Apparently he’s managing it as he has not crashed. Yet.

Here’s some things I learned about tires many years ago.

Many years ago, before I started racing, one of my co-workers had a Honda CB350 motorcycle for basic transportation. I wouldn’t call him a motorcyclist per se, but just a guy who rode a motorcycle. One day he came to me with a question.

“My bike kind of wallows in turns and pogos when it’s bumpy. A friend suggested I change the Honda shocks with some S&Ws. I did that and it hasn’t made much difference. Can you help me?”

“Let’s go take a look,” I said. We went out to his motorcycle and I asked him to sit on it. I was intending to look at the shock pre-load, which was the only adjust-ability offered by his shocks. When he sat on the bike I saw that his rear tire was low.

“When was the last time you checked your tire pressure?” I asked. He thought for a moment.

“I don’t remember,” he said. I got out a pressure gauge from my small toolkit and checked his tire. It was about 15 psi, when it should have been in the high 20s.

“Your rear tire is low. Pump it up to the recommended pressure when you get home.” The next day he came to work all smiles. Pumping the tire up to the proper pressure did the trick.

Remember that tires are part of a bike’s suspension — it’s not just the forks and rear shock(s). Keep tires at the recommended pressure and not only will they last longer, but the bike will ride better.

(Much of this part is extracted from the book “Racing the Gods.”)
After two years with the Honda CB450 I was ready for a new street bike. When I saw photos of the 1974 Ducati 350 Desmo single I wanted one of those, bad. Logically it was not a good choice, but it was so pretty! The little ochre bike looked to me like a nearly perfect motorcycle.

To my dismay none of the Desmo singles were available in the U.S.

I didn’t really want a Ducati 750 Sport, but I decided to settle for it in place of the 350 Desmo. It was also a beautiful motorcycle, with the same bright yellow-orange bodywork, but I wasn’t sure about the motor’s gangly look. It was a 90-degree V-twin, with one cylinder pointing up and one cylinder pointing forward, making the motor rather long. After I rode it through some bumpy curves and found it handled superbly, I was pleased with the purchase.

A bit later I talked to Phil Schilling about my 350 Desmo race bike, and he gave me the phone number of a Ducati dealer in Canada named Richard White. Phil thought White might have some go-fast parts for my 350cc Desmo racer. I called Mr. White at his shop in Quebec and we talked about oversized valves, high-compression pistons, big-bore kits and so on. At some point in the discussion I told him I had a 750 Sport as a street bike even though my dream bike was the 350 Desmo single, which was not available in the U.S. Then I heard him say these magic words:

For a moment I was stunned. I recovered quickly and after about 5 seconds I said into the phone, “Tell me more.”

It was expensive but about three weeks later a large crate arrived. In about an hour I had a beautiful little bright ochre motorcycle on my garage floor. I put oil and gas into the bike, acid in the battery and kicked it to life. Now I had two yellow-orange Ducatis, a 750 Sport and a 350 Desmo. Life was good. 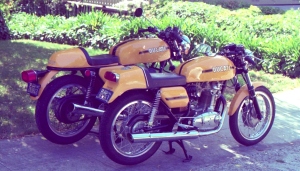 The first ride on the Sportling (as it came to be known) was disappointing. The bike didn’t handle as well as I expected. My 350 Desmo racer was much better. The Sportling didn’t handle badly, there was just a bit of vagueness when cornering I wasn’t expecting.

I took a long look at the differences between the Sportling and the 350 Desmo racer, which handled superbly. They had the same frame and basically the same motor. The suspension was also similar. The tires were different. The Sportling came with old-fashioned tires, a rib pattern on the front and what was called a universal tread pattern on the rear. Even though there was plenty of wear left on the original tires I bought a pair of Dunlop K81s, which were the top choice sporting street tire at the time. I removed the original tires and installed the K81s and took the bike out for a ride.

Ahh. Now that’s the way it should work! All it took was The different tires to give the Sportling the handling I expected. The bike was cutting through the corners with precision, going exactly where I wanted it to go, and with remarkable stability for such a light motorcycle. I rode home with a big grin on my face.

This experience is from racing, but it probably applies to street tires as well. During all of 1976 and 1977 I used Goodyear racing slicks on my Ducati twins, except once. There was a labor dispute at the Goodyear plant and the motorcycle racing slicks were not available. The only other option was Dunlop racing slicks so Dale (my racing sponsor) bought a pair and mounted them on the 883cc Ducati Superbike racer for am AFM race at Sears Point.

I went out for the first practice and began getting up to speed after letting the tires warm up. I didn’t like the Dunlops at all; the bike was sliding around a lot, especially under acceleration. It felt like I wasn’t getting the traction I got with the Goodyears. However, when I got back to the pits Dale showed me the lap times I had turned during the practice. To my surprise the times were just as fast as with the Goodyears. I was puzzled.

Later I was talking to George Miller, a more experienced pro racer, about the differences between the tires. He told me that my experience was just what I should have expected. The Goodyears, he explained, were designed to grip right up to their limit of adhesion, and they would let go quickly if pressed further. I’ve sure experienced that, I thought. On the other hand, he continued, the Dunlops were designed to give a warning as they approached the edge of traction by sliding just enough to let you know they were near their limit. Each approach had its advantage. If you knew exactly where the edge was you could go marginally faster on the Goodyears, the trade-off being that if you went just a bit too far you were suddenly bouncing along on the ground.

The Dunlops gave you enough indication of the approaching limit that you could avoid landing on your head unless you were willing to ignore the warning slips, or were ham-fisted enough to transition from not-yet-sliding to over-the-limit so fast you couldn’t react in time.

The previous tales all came from the mid-1970s. This one is a bit more recent, around 1997. When I returned to motorcycling in 1996 I bought a 1988 Honda HawkGT, a blue one, totally stock like this one (image from chicagolandmustang.com).

From the HawkGT email list recommendation I got a pair of Metzeler ME3s. Nice tires, rather sporty. I liked them, they provided good grip in the dry and reasonable traction in the wet. They were awful if there was a bit of gravel on the road though.

I wore them out pretty quickly and replaced them with a set of Bridgestone Battlax tires; I forget exactly which model. Again it was based on a recommendation from the HawkGT list. They were good tires, I guess, lots of people liked them, but for me they didn’t offer the same confidence in fast, tight corners that the Metzelers did. Perhaps my riding style pushed the Battlax tires too far? Anyway, I ended up putting the Bridgestones on a second HawkGT I had bought when I sold it (it needed new tires anyway). I put new Metzelers back on my keeper HawkGT and was happy again.

So what’s a person to do these days? Buying four or five sets of tires for comparison testing would be prohibitively expensive. There are places to get recommendations, however. Motorcycle magazines will have tire comparison tests from time to time. Most motorcycle models have on-line support groups — email lists or forums — where you can ask for recommendations. I think the best thing is to find people who have your model of motorcycle and ride like you do, and see what they like.